PROBABLE CAUSES
This damage is attributed to the thermal overload of the piston. There are two causes for this.

Abnormal combustion can be diagnosed via the following features: 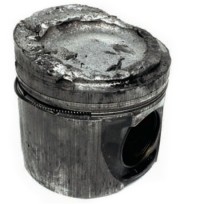 An abnormal combustion can be caused by a number of factors such as if the air-fuel mixture in the combustion chamber is too rich. This can be the result of the following:
• The air supply is reduced, e.g. the air filter is clogged.
• The fuel delivery is set incorrectly.
• The start of fuel delivery is set incorrectly.
• The nozzle needle is either wedged or stiff.
• The exhaust gas system is clogged.

There is ignition delay and misfiring, which may be caused by:
• The incorrect fuel or fuel with an insufficient cetane rating is being used, or there is gasoline in the diesel.
• The valves are leaky, resulting in compression loss.
• The protrusion is too small (i.e., there is insufficient compression).
• The air pre-warming is defective (especially for very low ambient temperatures).

Overheating of the piston crown can be identified via the following features:
• The combustion bowl is not damaged.
• An excellent spray pattern can be observed at the top of the piston.

The excessive temperature level of the piston crown can be caused by:
• The cooling oil nozzle is either bent, has become detached or has not been assembled (assembly error).
• The time between oil changes is too long. In this case, there is a risk of polymerization of the engine oil, especially when using biofuels, such as rapeseed and soybean oil, which can result in the cooling oil nozzles being clogged.
• Contamination, such as gasket residue, etc., prevents the required circulation in the oil circuit.

SOLUTION
• Set the injection amount and timing according to the manufacturer’s specifications.
• Check the injection nozzles for any leaks, the injection pressure and the spray pattern.
• Pay attention to correct alignment when assembling the cooling oil nozzles.
• Thoroughly clean the oil channels in the engine block, the crankshaft and the cylinder head.
• Make sure the pressure-regulating valve is functioning correctly.
• Ensure that the time between oil changes is much shorter when running the engine on biofuels.