The oil leak is caused by minor imperfections in the engine block machine surfaces at the oil cooler interface that may allow engine oil seepage past the oil cooler O-rings. To cure this problem, GM offers the following information:

1. Inspect for other oil leaks that may be perceived as an oil cooler leak. An oil leak from one of the main bearing cap side bolts may appear to be coming from the oil cooler. 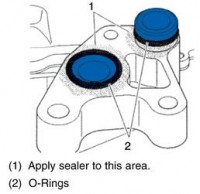 8. Allow the vehicle to sit for eight hours at room temperature to allow the sealant to fully cure before initial startup.